HERE THEY ARE!... THE KNIGHTS HAVE COME (Qva LIBRE)! 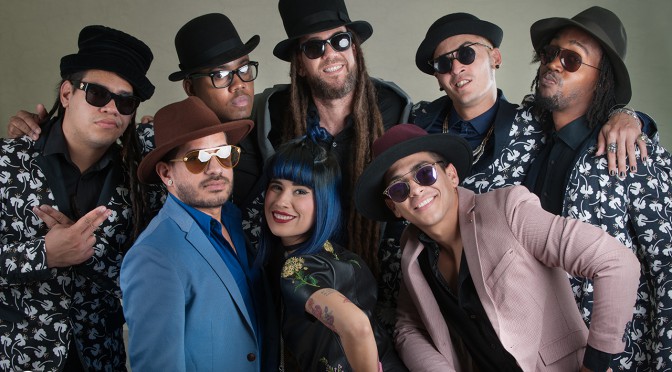 Qva Libre fellows are a great show on stage. They quickly wrap you with their sound and visuals. They are magnetic and their attractiveness wins you over. Most amazingly, in spite of their fame and success, out-of-the-stage Qva Libre guys are simple, easygoing, as if music were all about fun more than work. They speak about the band's projects with the typical illusion of beginners, as if they had not realized that they are Cuba's fusion music number one band at the moment. They almost won the Cubadisco 2017 prize in the
Urban Music category with the album "Rock duro mami".

Through Cubamusic.com, they just launched the band's last "bomb", the double CD "Los Caballeros de la noche" (The Knights of the Night). It is a feast for their thousands of fans both inside and outside Cuba. Cubamusic.com has had the privilege to hold an interesting conversation with Carlos Díaz (Carlitos), the band's leader. The musician told us, from first hand, about Qva Libre's momentum and the expectations for this mega CD they just launched.

- Carlos, what's in this super CD?
"Los Caballeros de la Noche” is, indisputably, the best CD we have produced so far. It has 20 songs with a fully renewed sound, more inclined to urban music. In this new compilation we include singles like ‘Te deseo suerte’, ‘Vente conmigo’, ‘Para darte mi amor’ and ‘Tú y yo’ among others."

- Carlitos, Qva Libre is very popular, especially among the younger audiences... What is the secret of all this success, in your opinion?
"The secret of our project is to be active in the musical environment and to always surprise the public with different proposals. If I had to choose the most popular songs of Qva Libre I would take 'Ando caliente', 'La tremendonga', 'Fiesta Crazy', 'Cuando tú dices que me amas', 'Tú eres la razón', 'Por estar contigo', 'Juntos pero no revueltos', 'Mujeres' and 'No he podido olvidarte'. Each song different from the other. Also, we have co-staged with many present-day renowned musicians: Havana de Primera, Cola Loca, Karamba, David Blanco, Interactivo, William Vivanco and very specially with merengue singer Olga Tañon in the single ‘Tú eres la razón’. Promotion has also been important, which we always cared for. Take this very same platform, for instance. I think Cubamusic.com's relationship with Cuban artists is WELL important, and I say it in capital letters, because this digital platform is vital for the promotion of Cuban music and its artists. I personally thank all the staff for all the wonderful work they have done with Qva Libre all along, for trust and -above all- for faith in Cuban music culture."

It is impossible not to notice and enjoy the costumes and visuals of Qva Libre. When did you choose for such a different and peculiar image?
"Our image was created spontaneously, from ideas that emerged little by little after tours and presentations. Then, crown hats and huge glasses, colors and saxophones came to be, in an attempt to represent the natural aspect of the band together with its distinctiveness. But let me get back to those first moments, when my guitar was my only companion on the stage."

- In your opinion, what music genre does Qva Libre fit in?
"We have our own sound, which has evolved with the new times of the band, always searching for something new and showing unique mixes. Qva Libre is about a lot of rock that was dressed with an alternative rhythm. After that, some funk came up but we have always kept our Cuban roots. We later brought in fusions and urban music, so that there is a mixture of genres with a single music essence."

- Speaking about the sonority of Qva Libre, we got to know you are introducing a new vocalist. Is there any special reason for this sudden change?
"Lenier Vera, the former vocalist separated from the band to follow his own projects, which has nothing to do with the new sonority that is created by the new times of the band. The new voice is Kendaya, a 21-year-old young man who has perfectly adapted to our mechanism and precisely he composed the single ‘Te deseo suerte’. ”

- Qva Libre is very active in Cuban media, radio and television, but enjoying you live is always a different experience..
"Well, everyone knows about our fixed space on Wednesdays at the Cantante Mi Habana Cafe, National Theater, from 5pm to midnight. This has become a traditional appointment for Qva Libre, an anchorage. For the show-business people, we have presentations at the renowned bar Mio y tuyo, after 2:00 in the early morning. People can also follow us on the Internet. We have a profile on social networks Facebook and Instagram, videos on YouTube and websites specialized in the musical and cultural field and of course, we are here in Cubamusic.com, here you can find much of the music production of Qva Libre."

- What plazas has Qva Libre lacked to visit? Where would Qva Libre like to go?
"Well, we are open to all kinds of proposals and, lately, we have been highly requested by the European and Latin American audiences. As to Cuba, we will soon be in the East with presentations in Guantanamo, Holguin and Santiago de Cuba. Furthermore, we will be in concert at La Tropical and we will be visiting universities to promote the new album."

We say goodbye to Qva Libre but for a short time. Cubamusic.com is well aware of the restless musical life of these guys who have imposed a unique image, a very personal mark. Their full success is yet to come, we better keep in touch: it’s just a matter of time!