Young Aramís Galindo, who was born in Matanzas province, the cradle of his son and rumba roots, is a former amateur baseball player who became a singer exhibiting a sweeping vocal tessitura.
For five years, he was one of the leading voices of the important "Adalberto Alvarez y su son" orchestra, with which he made a number of discographic recordings and world tours.  These were very fruitful years that allowed him to improve his performance as a singer.  Likewise, Aramís integrated the well-known "Team Cuba", that gathered the most prominent musicians from important Cuban salsa orchestras, to make a historical tour throughout Europe.
At the end of the year 2000, he founded his own orchestra, made up by 13 musicians.  His music constitutes a genuine party of the Cuban son, with modern and elegant arrangements and a great musical energy displayed in every performance of his orchestra.
With his orchestra, Aramís recorded in 2001 his first CD entitled "Esto tiene c ohímbre" where, besides ratifying his superb vocal qualities, he reveals himself as the author of five of the pieces included in the phonogram.
Though relatively young, soon his orchestra found a place in the preference of dancers across the island, since his work respects the foundation of the son while introducing the influence of the Cuban rumba and timba.
At international level, the experience accumulated by Aramís and his orchestra also received the same acknowledgement during his prolonged tours throughout Europe which included cities from Finland, Germany, Austria, Denmark and the United Kingdom.
Aramís Galindo is still developing the career he began with Master Adalberto Alvarez in international scenarios and with his distinguished bearing, his privileged voice, his eloquence on the stage and his indisputable charisma he is already included among the most widely heard artists of dancing popular music in the country.
As Master José Luis Cortés, director of NG La Banda, stated:  "on very few occasions we have had the opportunity of listening to an authentic voice born of cross-cultures; a mixture of black agony and Flemish agony...  In many events, I have had the privilege of working with Aramís, when he was a member of other famous orchestras.  Now that he has his own group...  we can say that he is a first-rate singer". 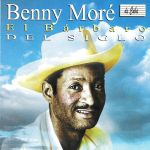