Dancing popular music orchestra.
Clave Cubana was founded in 1999.  With the structure of a small jazz band format, this young group of musicians "with their own, young and modern personality- took off from the deepest roots of Cuban music and reintroduced the sound, the spirit more than anything else, that had previously enriched our dancing music through great orchestras like, for example, the Casino de la Playa or the Riverside orchestras and whose highest expression was found in the Cuban nature of Benny More`s Banda Gigante.
After a few years of what was originally a mere dream of Orlando Navarro, its persevering director, and thanks to the talent of its musicians, the Clave Cubana Orchestra has become, nowadays, a well-known and creditable artistic entity in the country.  The same year of its creation, this orchestra was selected as the Novel Orchestra of the Year by popular election.  Today, its prominent presence at the main scenarios in the capital and ma ny other cities, as well as its participation in the most important national television and radio stations constitute a true proof of their wise decision to face that challenge.
The Cuban son is the backbone of the Clave Cubana orchestra, as has been for the history of Cuban popular music during the 1980`s.  The sones performed by Nelson Cotrina, a young author and singer of Clave Cubana, warrant the sonero and creative spirit of the orchestra.  This can be appreciated both in "Dámelo", with a profound sonero root closely adhered to tradition and in "La moda" and "La negra" (changüi), with more modern characteristics, though without missing the essence of this musical genre that displays such a Cuban nature.
Besides, the genres cultivated by this orchestra include the pilón, a rhythm created by Pacho Alonso.  An example of this can be found in the song entitled "Si bailas", composed by Osuán Ponciano, the orchestra"s pianist and arranger, who managed to capture, in a remarkable way, the roots of this genre.  Likewise, Clave Cubana has developed the bolero, the cha cha chá, the Cuban jam sessions and even the cumbia. 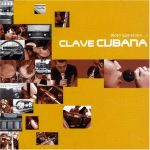