Adriano Rodríguez
Singer.
Adriano Rodríguez Bolaños was born in 1923 in Guanabacoa, a town in Havana. He was raised within a family who encouraged his musical concerns, since his grandmother belonged to the Clave Choirs that used to play during Christmas, his grandfather was director of a sextet in which Adriano performed as second voice from an early age and his father was both a tailor and a musician capable of playing a number of instruments. In 1939, Adriano joined the folkloric group known as Lulú Yonkori with whom he participated in performed lectures on Afro-Cuban themes given by expert Dr. Fernando Ortiz. During the 1950s the group was then named Rapsodia Negra and became a well-known group for its quality and for its frequent performances in both radio and television programs. During that time, the group made two records entitled "Guaguasones" and "El vive bien". Likewise, during that same period, Adriano Rodríguez participated in some super-productions presente d in important cabarets in Havana, namely, Tropicana, Sans Souci and Copa Room. He formed occasional duets with outstanding celebrities of the Cuban music like Celia Cruz, Paulina Alvarez, Barbarito Diez, Merceditas Valdés and Carlos Embale.m ,During the following decade, he continued his attachment to the folkloric music, so he joined musicologist Argeliers León as narrator in the lectures delivered by León at the National Theater. This was considered the embryo of what was later the National Folkloric Ensemble. During this period, he renewed his contact with the Cuban traditional trova and, once again, he performs classic themes of this genre. In 1962, he founded the "Trovadores Cubanos" group together with Dominica Verges, Guarionex Garay and guitar players Ismael and Octavio Sánchez (Cotán) who, for more than ten years, disseminated anthological trova pieces through stages and the mass media. Adriano Rodríguez was also founder of the National Choir of Cuba and was the head of the string section of both baritones and basses. As main representative of the lyric song, Adriano Rodríguez performed in important centers in Cuba and abroad accompanied on the piano by consecrated pianists like Frank Emilio Flyn, Odilio Urfé and Nelson Camacho. He also devised and promoted a Cycle of Didactic Concerts of works composed by outstanding musicians of Cuban and universal significance like Ernesto Lecuona and Adolfo Guzmán together with interpreters of great prestige, namely, Esther Borja, Yolanda Hernández, Alina Sánchez and Ramón Calzadilla.mThe theater and the filming industry are some of the artistic manifestations which had had the privilege of working with Adriano Rodríguez. In the first case, during the Cecilia Valdés zarzuela (traditional Spanish operetta) and, in the second case, for his participation in the films entitled "Cuba canta", "Las doce sillas" and "El otro Cristóbal".
Adriano has developed a sound international career which includes his performance, together with Carlos Embale, at the Carnegie Hall in New York, in 1979, a memorable concert enthusiastically received and applauded by an audience who was able to enjoy the beautiful yoruba chants. Another significant moment in his career took place recently in Hamburg when he performed "Germania" by Sindo Garay, a true gem of the trova song in his country and the great impact of his presentation on the European press.
Recently, he has shared his talent with young musician Edesio Alejandro, whose imprint has already been registered in a number of phonograms of great international success like "CoraSon de son" and "Cubatronix".
Adriano Rodríguez is one of Cuba"s treasures, acknowledged across the world for his powerful baritone voice that displays a broad vocal register and impeccable tuning. All these features have allowed him to cover a broad musical universe, from the prayers associated with the Afro-Cuban religion and the Negro spirituals to the lyric song, the traditional trova and the Cuban son. 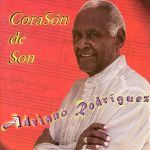