Delvis Ramos Denis is a singer of Cuban, Latin music (main voice, maracas, guira, guiro, keys, composer and general direction) He was born in Esmeralda, Province of Camagüey (Cuba), on January 27, 1975. After being part of several local groups, at age 19 he moved to Havana. There he received minor singing and percussion classes at the Casa de Cultura in Old Havana and at the "Paulita Concepción" Conservatory, as well as being part of the quintet "Son Iré", a grouping in which traditional Cuban music was performed. Years later, on August 15, 1998 he formed the septet "Chocolate Caliente", with which he was working for 5 years in various tourist places of the city, which would be the basis of what is now "Chocolate Son" in Spain, Representing Cuban, and Latin music. In 2014 went on sale for different digital paginal like: CD Baby, Amazon, Spotify, etc. His own musical production, under the name of " PA' QUE TÚ PRESTES ATENCIÓN" DELVIS RAMOS and his Chocolate Son. At present, Delvis conti nues presenting himself in concert in different party halls, discos, town parties, etc. Throughout Spain and abroad, especially participating in salseros events, and at the same time collaborating with other musical projects. Currently, he finds himself recording the songs for his second musical production (CD). 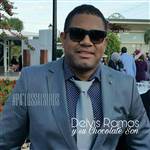