El Guayabero was born in Holguín province on June 4, 1911.  When he was 15 years old he began playing the maracas as part of a septet of sones known as "La Tropical" made up by some friends with the purpose of enjoying and performing at the country dances.
During the 1940s, he began his career as composer with "Tumbaíto", a song that was included in Libertad Lamarque`s repertoire and title  he used as an alias for some time.  Afterwards, he composed two sones, "Como vengo este año" and "El Guayabero". He composed the latter when he was performing as tres player in "Trovadores Holguineros" ensemble.  Pacho Alonso, the well-known Cuban musician, first heard the song and then recorded it in a long-playing record that toured across the world.  Later on, the Original de Manzanillo Orchestra used the refrain in a tribute paid to Faustino who, since then, was known as "El Guayabero", thus suggesting that liar"s vein which is commonly found in the country man who us es to invent heroic deeds and victories.
Skillful master of the double meaning, the Cuban"s idiosyncrasy, his ingenuity, witty remarks and his love for highly erotic themes amusingly disguised are some of his main features.
His sones still preserve the structure and rhythm found in the montuno son, originated in the eastern region of the island since the end of last century, associated with elements of plucked strings: the guitar and the tres.  El Guayabero attaches a great importance to the tres, since he is always accompanied by this instrument and this is, in fact, one of the main features of his creation without missing the sonority that identifies him with other traditional soneros like Carlos Puebla or Los Compadres.
The quatrains (and occasionally the décimas) alternate with a refrain which is almost always a simple phrase or verse or, in other cases, two verses, or as several intertwined refrains where the soloist alternate with the choir. 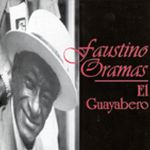